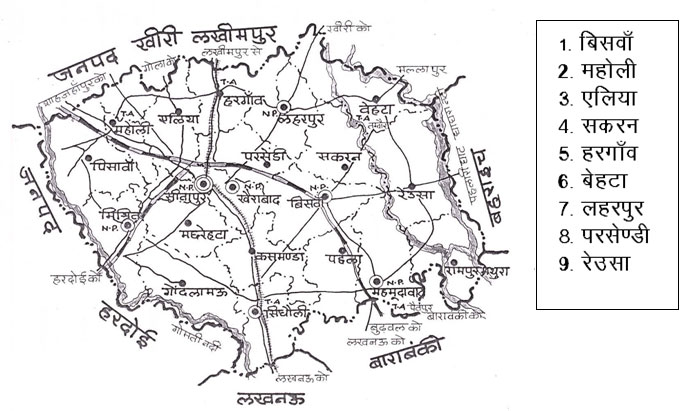 
Area, Production and Productivity of major crops cultivated in the district


Production and productivity of livestock, Poultry, Fisheries etc in the district (2011)

The Sitapur district is situated in central plane at 27°.54’- 27°.60’ N and 80°.18- 81°.24’ E at 100-150 MSL. The topography of the district is mostly planed, but large area comes under low land that is popularly known as Jheels. The ICAR allotted north-east side of the district to KVK, Sitapur-II, which is covered by three major rivers (Gomti, Chowka, Ghaghra) and their tributaries namely Sarain, Pirai, Gond, Godia, Kevani, Ikharia,comes from the Himaliyan range and every year there is occurrence of flood make a typical undulated area known as Ganjar.Average annual rainfall of the district is 989 mm. District have mainly Matiyar, loam, clay,bhoodtype of soils. Agriculture is the main and important occupation of the district. Wheat, Paddy and Urdare the main crops whereas Sugarcane, Mustard, Mentha and Tulsa are the main cash crops. Main horticultural crops are mango, Banana,Papaya,Guavaand Beretc.Farmers are also engaged in vegetable growing e.g. tomato, brinjal, okra, cole crops, cucurbits and leafy vegetables. Potato and vegetable pea is also grown in large area. Buffalo rearing and goat keeping are important component of the animal husbandry. Mostly milk is collected by co-operative processing units and to some extent milk is processed in the form of Deshighee, paneer, khoya.

There are three categories of the farmers in the district namely Resource Rich, Resource Poor and Landless Labourers. On the basis of the topography, soil types and irrigation availability, the district may be divided into two major Agro-Ecological Situations i.e.AES-I((Blocks- Maholi, Aeliya)and AES-II.(Blocks- Behta, Sakaran, Laharpur, Hargaon, Biswan, Parsendi, Reosa).